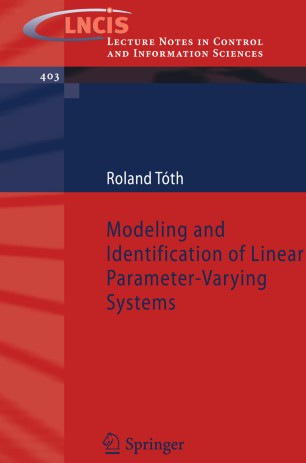 Through the past 20 years, the framework of Linear Parameter-Varying (LPV) systems has become a promising system theoretical approach to handle the control of mildly nonlinear and especially position dependent systems which are common in mechatronic applications and in the process industry. The birth of this system class was initiated by the need of engineers to achieve better performance for nonlinear and time-varying dynamics, c- mon in many industrial applications, than what the classical framework of Linear Time-Invariant (LTI) control can provide. However, it was also a p- mary goal to preserve simplicity and “re-use” the powerful LTI results by extending them to the LPV case. The progress continued according to this philosophy and LPV control has become a well established ?eld with many promising applications. Unfortunately, modeling of LPV systems, especially based on measured data (which is called system identi?cation) has seen a limited development sincethebirthoftheframework. Currentlythisbottleneck oftheLPVfra- work is halting the transfer of the LPV theory into industrial use. Without good models that ful?ll the expectations of the users and without the und- standing how these models correspond to the dynamics of the application, it is di?cult to design high performance LPV control solutions. This book aims to bridge the gap between modeling and control by investigating the fundamental questions of LPV modeling and identi?cation. It explores the missing details of the LPV system theory that have hindered the formu- tion of a well established identi?cation framework.