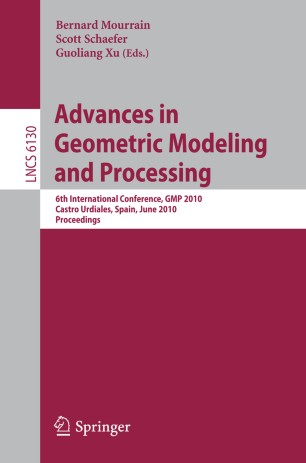 Advances in Geometric Modeling and Processing

This volume contains the papers presented at 6th Conference on Geometric Modeling and Processing (GMP 2010) held in Castro Urdiales, Spain during June16–18,2010. GeometricModelingandProcessingisabiannualinternational conference series on geometric modeling, simulation and computing. Previously, GMPhasbeenheldinHongKong(2000),Saitama,Japan(2002),Beijing,China (2004), Pittsburgh, USA (2006) and Hangzhou, China (2008). GMP 2010 received a total of 30 submissions that were reviewed by three to four Program Committee members on average. While the number of subm- sions dropped signi?cantly from previous years, the quality did not and was still quite high overall. Based on the reviews received, the committee decided to - cept 20 papers for inclusion in the proceedings. Additionally, extended versions of selected papers were considered for a special issue of Computer-Aided - sign (CAD) and Computer-Aided Geometric Design (CAGD). The paper topics spanned a wide variety and include: – Solutions of transcendental equations – Volume parameterization – Smooth curves and surfaces – Isogeometric analysis – Implicit surfaces – Computational geometry Many people helped make this conference happen and we are grateful for their help. We would especially like to thank the Conference Chair, all of the authors who submitted papers, the ProgramCommittee members who reviewed the papers and all of the participants at the conference.