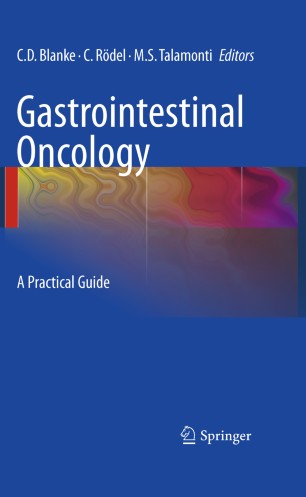 Gastrointestinal Oncology is an evidence-based, practical reference intended to assist in the diagnosis and management of patients with gastrointestinal malignancies. It is designed to be as user friendly as possible and is distinguished by the extremely practical, concrete nature of the information presented and by the multidisciplinary approach adopted. In addition to disease-oriented chapters spanning sites from the esophagus to the anus, non-anatomic subjects such as modern imaging techniques are also addressed. Translational science is supplied where useful in the decision-making process. All of the authors are internationally recognized experts. This book is an ideal resource for oncologists, surgeons, gastroenterologists, and primary-care providers looking for the latest and best information on how to deal with a wide variety of gastrointestinal neoplasms.

Dr. Blanke has been the Provincial Head for Systemic Therapy, as well as the Chief of Medical Oncology at the University of British Columbia, since 2008. Professor Blanke has an international reputation in treatment and research of colorectal cancers and gastrointestinal stromal tumours. He has a particular interest in new drug development and currently chairs the North American phase III Intergroup trial of chemotherapy plus bevacizumab or cetuximab in advanced colorectal cancer (co-principal investigator), and the National Cancer Institute-designated GIST Research Task Force. Dr. Blanke attended medical school at Northwestern University in Chicago, and hre underwent additional internal medicine and oncology training at the Gundersen Medical Foundation (Wisconsin) and Indiana University (Indiana), serving as chief resident and chief fellow at the latter institutions. Dr. Blanke is the author of more than 130 manuscripts and 20 book chapters, and he has presented at more than 170 conferences, including the Plenary Session of the 2001 American Society of Clinical Oncology meeting. He has received multiple research, teaching, and service awards. Claus Rödel (born 3.2.66) graduated from Erlangen Medical School in 1994. He achieved the medical speciality degree in Radiation Therapy in 2002. He was attending physician at the Department of Radiation Therapy at the University of Erlangen until 2006. In 2007, he was appointed Director and Chair of the Department of Radiotherapy and Oncology at the University of Frankfurt. Since April 2008, he also serves as Clinical Director of the Comprehensive Cancer Center of the University Hospital of Frankfurt. His main scienitific interests focus on combined modality treatment, including targeted therapies, for organ preservation for patients with rectal and bladder cancer, as well as molecular prediction of tumor response and radiation-induced apoptosis. His scientific work has been honoured with the Herman-Holthusen Award of the German Society of Radiation Oncologist (DEGRO) in 2004, and with the ARO Award of the German Cancer Society in 2005. Since 2007, he serves as editorial board of "Strahlentherapie und Onkologie". Mark S. Talamonti, M.D. is Clinical Professor of Surgery at the University of Chicago Pritzker School of Medicine and Chairman of the Department of Surgery at NorthShore University HealthSystem. Following graduation from Northwestern University Medical School in 1983, Dr. Talamonti completed a residency in General Surgery At Northwestern and then a fellowship in Surgical Oncology in the Department of Surgery at the University of Texas, MD Anderson Cancer Center in Houston. While at the MD Anderson Cancer Center, Dr. Talamonti developed his research interests in combined modality clinical trials for patients with gastrointestinal malignancies. Dr. Talamonti’s clinical expertise focuses on the area of gastrointestinal surgical oncology with specific interests in pancreas and gastric cancers. He has served as the principal investigator or co-investigator on two recent Intergroup Trials examining the role of combined chemotherapy with external beam radiation therapy as neoadjuvant strategies prior to Whipple procedures for potentially resectable pancreatic cancers. In addition, Dr. Talamonti has served as a clinical investigator on several multimodality trials examining outcomes following neoadjuvant therapy for gastroesophageal junction cancers. His most recent work with the American College of Surgeons National Cancer Database has helped define quality metrics and surgical standards for patients with pancreatic cancer. Dr. Talamonti is the author of over 120 peer reviewed scientific publications, as well as 25 book chapters. He serves on the Editorial Board for the Annals of Surgical Oncology and the Journal of Surgical Oncology. He is a member of many surgical societies including the Society of Surgical Oncology, the Society of University Surgeons and the American Surgical Association. Dr. Talamonti has been honored with numerous teaching awards and has been honored for his dedication and compassion in the care of patients with cancer and life threatening illnesses.