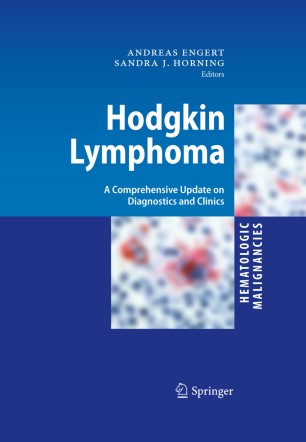 A Comprehensive Update on Diagnostics and Clinics

This book provides a well-illustrated, comprehensive, and up-to-date account of Hodgkin lymphoma. Epidemiology, pathogenesis, and the role of the microenvironment are examined in detail. The initial clinical evaluation and use of staging systems are fully discussed, and prognostic factors are carefully considered. The various treatment options for first-line and relapsed Hodgkin lymphoma are presented, including the newly available treatments for recurrent disease and the management required in special clinical circumstances. Given the very high cure rates and the young age of many patients, there is an increasing need to develop better individually tailored treatment strategies that will help to avoid both early and late side-effects of treatment. Such strategies receive due attention, and clear guidance is provided on the handling of Hodgkin survivors. This book will be of great value to hematologists, oncologists, and all others with an interest in Hodgkin lymphoma.

Andreas Engert M.D. is Professor for Internal Medicine, Hematology and Oncology. He received his medical degree at the University of Hannover and had his medical training at the University of Hannover and the University Hospital of Cologne. Between 1988 and 1990 he worked at the Imperial Cancer Research Fund in London on new immunotherapeutic approaches for cancer. After returning to Cologne, he and his group focused on developing antibody-based immunotherapy for patients with malignant lymphoma resulting in a number of experimental phase I/II clinical trials. He finished his postdoctoral lecture qualification in 1995, was appointed consultant and became head of staff 1996. He was appointed coordinating editor of the Cochrane Hematological Malignancies Group (CHMG) and vice director of the Department for Hematology and Oncology in 2000. After Serving as Secretary of the German Hodgkin Study Group (GHSG) since 1999, Prof. Engert was elected GHSG chairman in 2007. For his scientific work, he has received numerous awards including the Ludwig-Heilmeyer-Medal, the Arthur-Pappenheim Award and the Research Award of the University of Cologne. The focus of his research for many years has been the development of targeted therapy to combat malignancy. Activities include constructs such as bispecific monoclonal antibodies, radioimmunoconjugates, humanized antibodies or immunoligands for diseases such as neuroblastoma, chronic lymphocytic, acute leukemias and malignant lymphoma. Prof. Engert treats patients with all malignancies and consults for lymphoma patients. In addition he is active in the field of evidence-based medicine as editor of the Cochrane Review Group for Hematological Malignancies (CHMG). The clinical focus of his work is the German Hodgkin Study Group (GHSG) with all of its different facets including planning and conducting clinical trials of all phases. The GHSG has conducted more than 20 randomized studies with more than 20.000 patients overall registered and is actively involved in a number of early clinical trials evaluating new drugs for patients with Hodgkin Lymphoma.