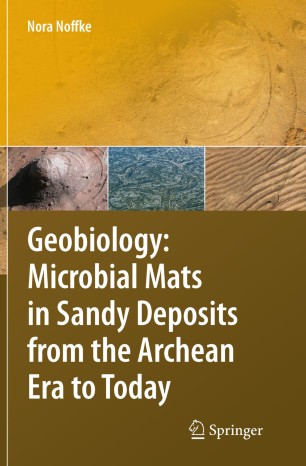 Microbial Mats in Sandy Deposits from the Archean Era to Today

A murmur is heard from the depths of time. Life and Earth are engaged in a dialog that has lasted for four billion years. Sometimes it’s a whisper, sometimes a roar. One part sometimes gets the upper hand, dominates the discussion and sets the agenda. But mostly the two have some kind of mutual understanding, and the murmur goes on. Most of us don’t listen. Nora does. She listens, and she tries to understand. Nora Noffke has focused her scientific career on the interaction between the living and the non-living. This is no mean task in an academic world where you are usually either this or that, such as either a biologist or a geologist. The amount of stuff you need to grasp is so large that it usually feels better to sit comfortably on one chair, rather than to risk falling between them. Geobiology is not for the faint of heart. Nora’s focus is on that all-important biological substance mucus, or EPS (ext- cellular polymeric substance). EPS is the oil in the machinery, the freeway to travel for many small animals and protists, the coat of armour for others, the mortar in the brick wall for yet others. For microbes such as cyanobacteria it may be the world they built, the world they live, eat, fight, multiply, and die in.

Nora Noffke is Associate Professor for Geobiology at Old Dominion University; Ocean, Earth & Atmospheric Sciences; For her research she has received the SEPM James Lee Wilson Award 2007, the GSA Fellowship 2007, and is nominated for the AAAS Fellowship 2008; Nora Noffke is Vice Chair of the GSA Division for Geobiology and Geomicrobiology, Member of the Council of GSW in Washington, and served for the NASA Astrobiology science definition team, Mars Exploration Rover.