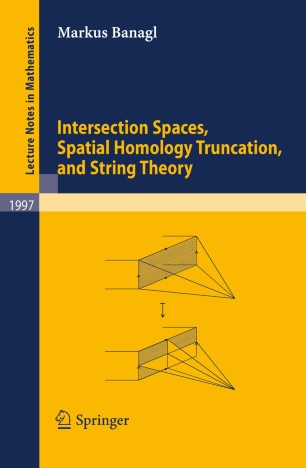 Intersection cohomology assigns groups which satisfy a generalized form of Poincaré duality over the rationals to a stratified singular space. The present monograph introduces a method that assigns to certain classes of stratified spaces cell complexes, called intersection spaces, whose ordinary rational homology satisfies generalized Poincaré duality. The cornerstone of the method is a process of spatial homology truncation, whose functoriality properties are analyzed in detail. The material on truncation is autonomous and may be of independent interest to homotopy theorists. The cohomology of intersection spaces is not isomorphic to intersection cohomology and possesses algebraic features such as perversity-internal cup-products and cohomology operations that are not generally available for intersection cohomology. A mirror-symmetric interpretation, as well as applications to string theory concerning massless D-branes arising in type IIB theory during a Calabi-Yau conifold transition, are discussed.