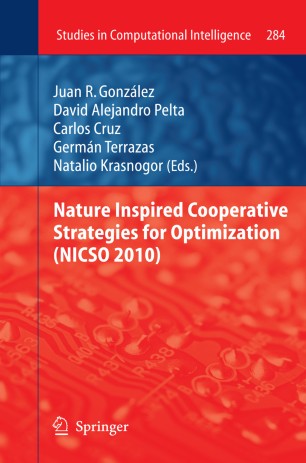 Many aspects of Nature, Biology or even from Society have become part of the techniques and algorithms used in computer science or they have been used to enhance or hybridize several techniques through the inclusion of advanced evolution, cooperation or biologically based additions. The previous NICSO workshops were held in Granada, Spain, 2006, Acireale, Italy, 2007, and in Tenerife, Spain, 2008. As in the previous editions, NICSO 2010, held in Granada, Spain, was conceived as a forum for the latest ideas and the state of the art research related to nature inspired cooperative strategies. The contributions collected in this book cover topics including nature-inspired techniques like Genetic Algorithms, Evolutionary Algorithms, Ant and Bee Colonies, Swarm Intelligence approaches, Neural Networks, several Cooperation Models, Structures and Strategies, Agents Models, Social Interactions, as well as new algorithms based on the behaviour of fireflies or bats.