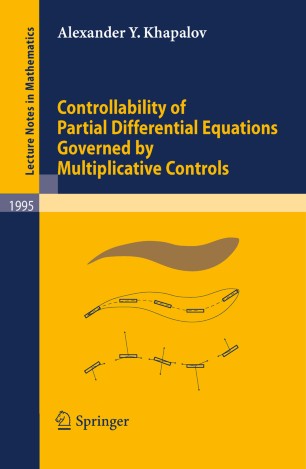 The goal of this monograph is to address the issue of the global controllability of partial differential equations in the context of multiplicative (or bilinear) controls, which enter the model equations as coefficients. The mathematical models we examine include the linear and nonlinear parabolic and hyperbolic PDE's, the Schrödinger equation, and coupled hybrid nonlinear distributed parameter systems modeling the swimming phenomenon. The book offers a new, high-quality and intrinsically nonlinear methodology to approach the aforementioned highly nonlinear controllability problems.

“This book offers a detailed study of controllability of infinite-dimensional control systems described by partial differential equations (PDEs), for which the control input appears in a multiplicative way in the differential equations. The book has features that are not often encountered simultaneously in the rest of the literature … . the book is interesting and will have an impact on the topic of the controllability of infinite-dimensional systems. Rigorous proofs are provided for all the results contained in the book.” (Iasson Karafyllis, Mathematical Reviews, Issue 2011 h)

“In this book, the control of evolution processes governed by partial differential equations is studied. … The book is well-written and a welcome addition to the bookshelf for mathematicians with interest in control theory and also researchers in control engineering.” (Martin Gugat, Zentralblatt MATH, Vol. 1210, 2011)