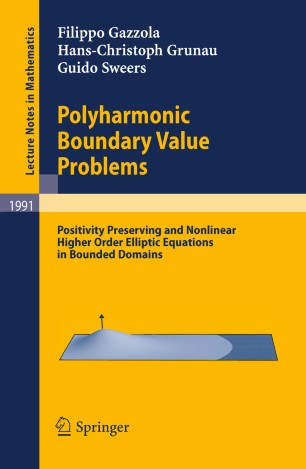 This monograph covers higher order linear and nonlinear elliptic boundary value problems in bounded domains, mainly with the biharmonic or poly-harmonic operator as leading principal part. Underlying models and, in particular, the role of different boundary conditions are explained in detail. As for linear problems, after a brief summary of the existence theory and Lp and Schauder estimates, the focus is on positivity or - since, in contrast to second order equations, a general form of a comparison principle does not exist - on “near positivity.” The required kernel estimates are also presented in detail. As for nonlinear problems, several techniques well-known from second order equations cannot be utilized and have to be replaced by new and different methods. Subcritical, critical and supercritical nonlinearities are discussed and various existence and nonexistence results are proved. The interplay with the positivity topic from the ﬁrst part is emphasized and, moreover, a far-reaching Gidas-Ni-Nirenberg-type symmetry result is included. Finally, some recent progress on the Dirichlet problem for Willmore surfaces under symmetry assumptions is discussed.