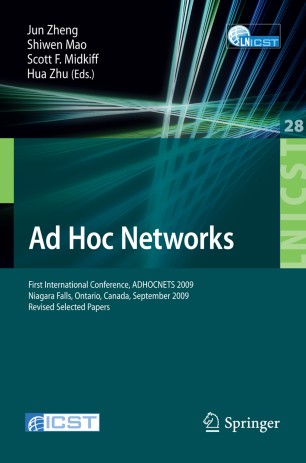 Part of the Lecture Notes of the Institute for Computer Sciences, Social Informatics and Telecommunications Engineering book series (LNICST, volume 28)

Ad hoc networks refer to the wireless networking paradigm that covers a variety of network forms for specific purposes, such as mobile ad hoc networks, sensor n- works, vehicular networks, underwater networks, underground networks, personal area networks, and home networks. The various forms of ad hoc networks promise a broad scope of applications in civilian, commercial, and military areas, which have led to significant new research problems and challenges, and have attracted great efforts from academia, industry, and government. This unique networking paradigm neces- tates re-examination of many established wireless networking concepts and protocols, and calls for developing new fundamental understanding of problems such as interf- ence, mobility, connectivity, capacity, and security, among others. While it is ess- tial to advance theoretical research on fundamentals and practical research on efficient algorithms and protocols, it is also critical to develop useful applications, experim- tal prototypes, and real-world deployments to achieve a practical impact on our so- ety for the success of this networking paradigm. The annual International Conference on Ad Hoc Networks (AdHocNets) is a new event that aims at providing a forum to bring together researchers from academia as well as practitioners from industry and government to meet and exchange ideas and recent research work on all aspects of ad hoc networks. As the first edition of this event, AdHocNets 2009 was successfully held in Niagara Falls, Ontario, Canada, during September 22–25, 2009.