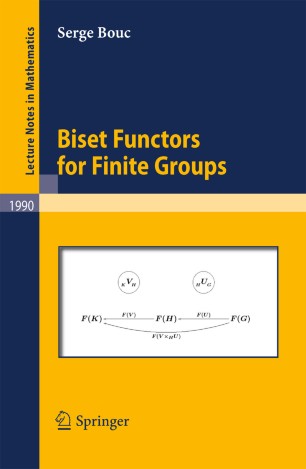 This volume exposes the theory of biset functors for finite groups, which yields a unified framework for operations of induction, restriction, inflation, deflation and transport by isomorphism. The first part recalls the basics on biset categories and biset functors. The second part is concerned with the Burnside functor and the functor of complex characters, together with semisimplicity issues and an overview of Green biset functors. The last part is devoted to biset functors defined over p-groups for a fixed prime number p. This includes the structure of the functor of rational representations and rational p-biset functors. The last two chapters expose three applications of biset functors to long-standing open problems, in particular the structure of the Dade group of an arbitrary finite p-group.This book is intended both to students and researchers, as it gives a didactic exposition of the basics and a rewriting of advanced results in the area, with some new ideas and proofs.

“The theory of biset functors was developed to give a unified construction of the elementary operations of restriction, induction, inflation, deflation and transport by isomorphism. … This volume gives an excellent introduction to the topic, which until now was only available in a series of research papers. … The book can be read by graduate students with a good knowledge of algebra, but will also be a valuable source for researchers.” (Robert Hartmann, Mathematical Reviews, Issue 2011 d)
Buy options