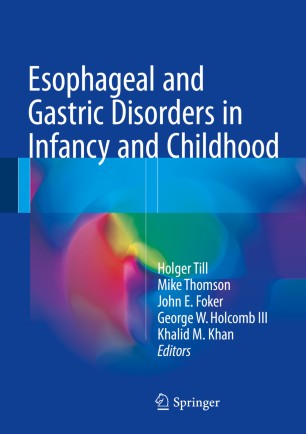 Esophageal and Gastric Disorders in Infancy and Childhood

Esophageal Gastric and Disorders in Infancy and Childhood includes a wide spectrum of different diseases. These range from congenital malformations such as esophageal atresia (EA), necessitating an experienced team of pediatric surgeons and neonatologists immediately after birth, up to gastro-esophageal reflux disease in elder children, necessitating the pediatric gastroenterologist and visceral surgeon. In the last few years some fascinating pediatric surgical techniques have evolved, such as the thoracoscopic correction of EA or the FOKER technique for elongation in cases of long-gap EA. Prof. Foker has developed this special traction technique and is one of the world's leading experts in long-gap EA. Moreover Prof. Thomson's has established the gold standard of minimally invasive endoscopic treatments for reflux in childhood. This book aims to bring all specialities and experts in pediatric gastroenterology and surgery together.

His clinical and research interests focus on enlisting biological growth signals to induce catch-up growth of hypoplastic and atretic structures so that they reach normal size and allow straight-forward repairs to be made. Principal among these conditions are esophageal atresia and hypoplastic cardiac valves and ventricles. By the use of growth signals to achieve normal-sized structures, good long term (70+ years) appear possible.

The staged treatment of esophageal atresia and stenosis and hypoplastic cardiac valves and ventricles by operations designed to enlist the appropriate growth signals. When sufficient growth has occurred, a standard repair can be carried out with a good long-term result.

Professor Holger Till is currently Chair Professor of the Department of Paediatric and Adolescent Surgery at the Medical University of Graz. He attended Medical School at the University of Goettingen (Germany) and the University of California in San Diego (UCSD). He also participated in a student exchange program with the Harvard Medical School (1988) and got fascinated with pediatric surgery while working with Professor Patricia Donahoe at the Massachusetts General Hospital in Boston. After graduation in 1989 he completed his residency in General Surgery and his fellowship in Paediatric Surgery at the Ludwig-Maximilians University of Munich. At that time Prof. Joppich trained him in EA-TEF repair and gastric interpositions. In 2004 he became an Assistant Professor of Pediatric Surgery at the Chinese University of Hong Kong with Professor Yeung, who taught him a thoracoscopic approach to TEF. In 2006 he returned to Germany and accepted the Professorship for Pediatric Surgery in Leipzig and in 2012 he followed Prof. Michael Höllwarth on the chair position of one of the largest departments of paediatric surgery in the German speaking community. Traditionally this unit has an extensive expertise in upper-GI-Surgery and functional analyses in children.

Professor Till is a member of numerous professional and scientific societies, but also supports parental groups, especially for children with esophageal atresia (KEKS) and gastroesophageal reflux (Refluxkinder e.V.). His present research focusses on the gastrointestinal tract and its metabolic and microbiological functions. He has published more than 130 scientific articles in national and international indexed journals and presented more than 100 abstracts.

Dr. George W. Holcomb III is Professor of Surgery and Surgeon-In-Chief at The Children's Mercy Hospital in Kansas City, Missouri.  He is board certified in general surgery and pediatric surgery, and has a special interest in minimally invasive surgery and prospective clinical trials.  He is a member of numerous professional and surgical societies, including the American Surgical Association, the American Pediatric Surgical Association, the European Pediatric Surgeons Association and the British Association of Pediatric Surgeons.  In addition, he is a past president of the International Pediatric Endosurgical Group.
Mike Thomson MBChB DCH FRCP FRCPCH MD
Mike Thomson is Professor of Paediatric Gastroenterology at the Centre for Paediatric Gastroenterology and Director of the International Academy of Paediatric Endoscopy Training in Sheffield, UK. He graduated from Aberdeen Medical School in 1985 and started paediatric gastroenterology training in 1987/8. In the early 1990s he spent five years working in Australia, is a Clinical Research Fellow in gastroenterology and cystic fibrosis at the Royal Children's Hospital Foundation in Brisbane with Prof Ross Shepherd. While there he was awarded his Medical Doctorate on cystic fibrosis genetics and energy expenditure.

His first position when he moved back to the UK in 1994 was as a Child Health Lecturer in the Liver Transplant Unit at Birmingham Children's Hospital with Prof Deirdre Kelly.

He was subsequently, in 1995, appointed as a Consultant at the Royal Free Hospital at the Unit of one of the founders of modern day paediatric gastroenterology, Prof John Walker-Smith. He leads the ESPGHAN Endoscopy Working Group. He has organized and runs the National Hands-On Paediatric Endoscopy Training Courses, Training the Trainer Courses and Endotherapeutic Courses and many International Meetings. Dr Thomson's interests include endoscopy training and interventional endoscopy. He has pioneered the use of minimally invasive endoscopic treatments for reflux in childhood over the past 10 years. He has published over 100 peer-reviewed articles including many original research studies in the area of infant and childhood gastro-oesophageal reflux and endoscopic advances, and also over 40 invited reviews, and heads a large research group. He is author of more than 50 Paediatric GI Chapters in International Textbooks and is Co-author/Editor of 10 paediatric textbooks including one of the standard texts for MRCPCH, ‘Concise Paediatrics’, and a major text for undergraduate paediatrics ‘Easy Paediatrics’. One of the two main paediatric endoscopy textbooks available currently is co-authored by him entitled ‘Practical Pediatric Gastrointestinal Endoscopy’. He has lectured at over 500 National and International meetings and is Chair of the Adolescent and Young Persons’ Section of the BSG, the ESPGHAN Endoscopy Working Group and the ESPGHAN Paediatric IBD Endoscopy Working Group. He is an Associate Editor of JPGN. He recently fulfilled the role of ‘Expert Advisor’ to the National Institute of Clinical Excellence Group on gastro-oesophageal reflux in infants, children and young people published in 2015. He has led on the development of Europe-wide Guidelines for Paediatric Endoscopy due to be published in 2016.

Khalid M. Khan is a Pediatric Gastroenterologist and Hepatologist who serves as the Medical Director of the Total Pancreatectomy and Autologous Islet Cell Program. His previous posts included, Medical Director of the Intestine Transplant Program and the Pediatric Liver Transplant Program at the University of Arizona. He has also served as participated as part of the team managing Long-Gap Esophageal Atresia patients at the University of Minnesota.  Research interests Include Clinical Outcome of Esophageal Atresia, Liver and Intestinal Transplantation. He is a member of national professional and scientific societies.