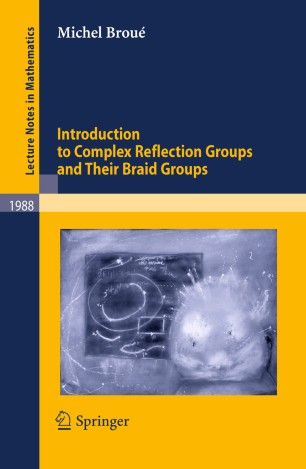 Introduction to Complex Reflection Groups and Their Braid Groups

Weyl groups are particular cases of complex reflection groups, i.e. finite subgroups of GLr(C) generated by (pseudo)reflections. These are groups whose polynomial ring of invariants is a polynomial algebra.

It has recently been discovered that complex reflection groups play a key role in the theory of finite reductive groups, giving rise as they do to braid groups and generalized Hecke algebras which govern the representation theory of finite reductive groups. It is now also broadly agreed upon that many of the known properties of Weyl groups can be generalized to complex reflection groups. The purpose of this work is to present a fairly extensive treatment of many basic properties of complex reflection groups (characterization, Steinberg theorem, Gutkin-Opdam matrices, Solomon theorem and applications, etc.) including the basic findings of Springer theory on eigenspaces. In doing so, we also introduce basic definitions and properties of the associated braid groups, as well as a quick introduction to Bessis' lifting of Springer theory to braid groups.