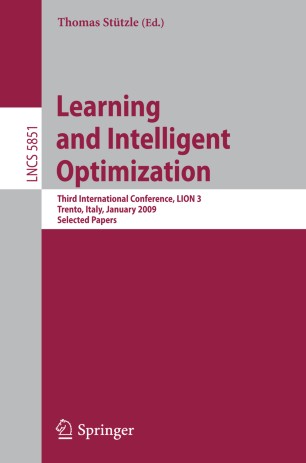 LION 3, the Third International Conference on Learning and Intelligent Op- mizatioN, was held during January 14–18 in Trento, Italy. The LION series of conferences provides a platform for researchers who are interested in the int- section of e?cient optimization techniques and learning. It is aimed at exploring the boundaries and uncharted territories between machine learning, arti?cial intelligence, mathematical programming and algorithms for hard optimization problems. The considerable interest in the topics covered by LION was re?ected by the overwhelming number of 86 submissions, which almost doubled the 48 subm- sions received for LION’s second edition in December 2007. As in the ?rst two editions, the submissions to LION 3 could be in three formats: (a) original novel and unpublished work for publication in the post-conference proceedings, (b) extended abstracts of work-in-progressor a position statement, and (c) recently submitted or published journal articles for oral presentations. The 86 subm- sions received include 72, ten, and four articles for categories (a), (b), and (c), respectively.