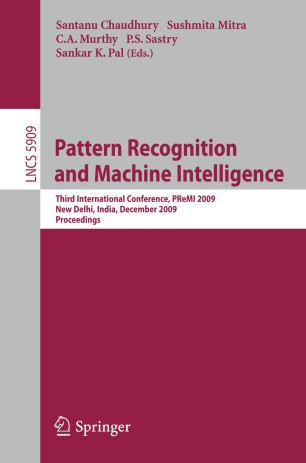 This volume contains the proceedings of the third international conference on Pattern Recognition and Machine Intelligence (PReMI 2009) which was held at the Indian Institute of Technology, New Delhi, India, during December 16–20, 2009. This was the third conference in the series. The first two conferences were held in December at the Indian Statistical Institute, Kolkata in 2005 and 2007. PReMI has become a premier conference in India presenting state-of-art research findings in the areas of machine intelligence and pattern recognition. The conference is also successful in encouraging academic and industrial interaction, and in prom- ing collaborative research and developmental activities in pattern recognition, - chine intelligence and other allied fields, involving scientists, engineers, professionals, researchers and students from India and abroad. The conference is scheduled to be held every alternate year making it an ideal platform for sharing views and expe- ences in these fields in a regular manner. The focus of PReMI 2009 was soft-computing, machine learning, pattern recognition and their applications to diverse fields. As part of PReMI 2009 we had two special workshops. One workshop focused on text mining. The other workshop show-cased industrial and developmental projects in the relevant areas. Premi 2009 attracted 221 submissions from different countries across the world.