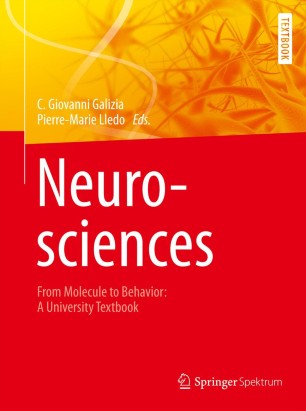 Neurosciences - From Molecule to Behavior: a university textbook

This textbook covers neuroscience from cellular and molecular mechanisms to behavior and cognitive processing. We also address  evolution of the nervous system, computational neuroscience, the history of neuroscience as a discipline and neurophilosophy – to name but a few. The book provides the newest state-of-the-art knowledge about neuroscience from across the animal kingdom, with particular emphasis on model species commonly used in neuroscience labs across the world: mouse, zebra fish, fruit fly, honeybee, and nematode worm. We aim at university students of neuroscience, psychology, biological sciences, and medical sciences, but also computer scientists, philosophers, or anybody interested in understanding how brains work.

The text offers itself as the main book in a class of neuroscience at a basic and advanced level. The main target readers consist of students at the level of a masterʼs degree and at the Ph.D. level. The book is also suitable for advanced courses at the end of a bachelorʼs degree curriculum. Thanks to its modular design, it provides an excellent source for interdisciplinary approaches as well, e.g., for philosophers looking for the physiological bases in debates about consciousness, for sports scientists looking at the neurobiological basis of motor control, for computer scientists interested in neural systems, for neurologists, psychiatrists, and biological psychologists interested in the neurobiological basis of brain diseases, as well as for biologists outside the field of neuroscience, in particular evolutionary and behavioral biologists.

"Neurosciences" is compiled in the tradition of the successful textbook "Neurowissenschaft" edited by Dudel, Menzel, and Schmidt – having been published in two German editions by Springer. Following this tradition, the textbook covers the entire field of neurosciences from a zoological perspective but also adds the more recent breakthroughs in Neuroscience. This approach exploits the multitude of different solutions that have evolved among animals providing a background for understanding the basic mechanisms not just of human neuroscience, but of neural systems per se. Furthermore, we emphasize model species: the animals that, on a day-to-day basis, are used in neuroscience laboratories around the world. 30 chapters written by world experts in their respective fields assure that the scientific content is up-to-date and at the forefront of science.