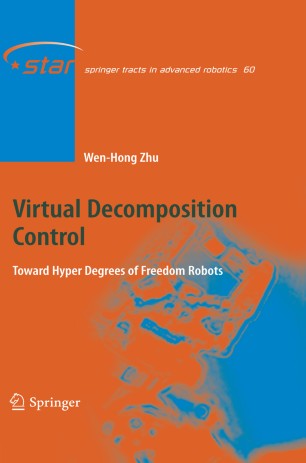 Toward Hyper Degrees of Freedom Robots

Driven by the need to achieve superior control performances for robots with hyper degrees of freedom, the virtual decomposition control approach is thoroughly presented in this book. This approach uses subsystem (such as links and joints of a complex robot) dynamics to conduct control design, while guaranteeing the stability and convergence of the entire complex robot without compromising the rigorousness of the system analysis.

This book comprises fourteen chapters. The first five chapters form the foundation of this approach. The remaining nine chapters are relatively independent. Starting from Chapter 6, each chapter deals with a particular type of systems including motor/transmission assemblies, hydraulic robots, coordinated multiple robots, space robots, humanoid robots, adaptive teleoperation, and modular robot manipulators. At the end, the extensions of this approach to distributed-parameter systems and to electrical circuits are given, paving the way for other applications to follow.

This book is intended for practitioners, researchers, and graduate students who have acquired fundamental knowledge on robotics and control systems and have been committed to achieving the best control performances on complex robotics systems and beyond.