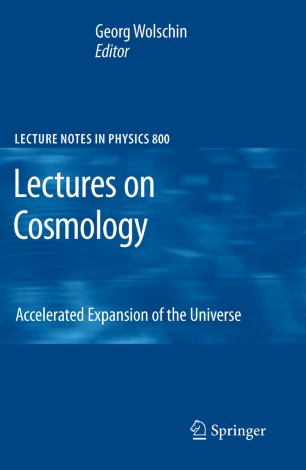 Accelerated Expansion of the Universe

The lectures that four authors present in this volume investigate core topics related to the accelerated expansion of the Universe.

The first lecture covers the inflationary period in the very early Universe.

The second lecture revolves around the accelerated expansion of the late Universe at redshifts z < 1 due to the enigmatic dark energy that is commonly interpreted as a cosmological constant. The discovery of this accelerated expansion relied on data from type Ia supernovae, so this second lecture is dedicated to the astrophysics of type Ia supernovae and their role in cosmological observations.

The third lecture, which seeks alternative explanations of dark energy, deals with modified gravity models. Such theories presently appear to be the most serious competitors to conventional dark-energy models based on a cosmological constant or its time-dependent counterparts arising from a scalar field

And the fourth lecture discusses currently available statistical methods that are indispensable for the analysis of cosmological data, thus making them necessary prerequisites for many of the results of modern cosmological research

This book is intended to serve as an entry point for graduate students and young researchers into active cosmological research.