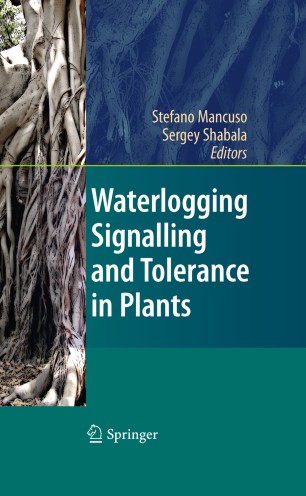 Waterlogging Signalling and Tolerance in Plants

In the last half century, because of the raising world population and because of the many environmental issues posed by the industrialization, the amount of arable land per person has declined from 0.32 ha in 1961–1963 to 0.21 ha in 1997–1999 and is expected to drop further to 0.16 ha by 2030 and therefore is a severe menace to food security (FAO 2006). At the same time, about 12 million ha of irrigated land in the developing world has lost its productivity due to waterlogging and salinity. Waterlogging is a major problem for plant cultivation in many regions of the world. The reasons are in part due to climatic change that leads to the increased number of precipitations of great intensity, in part to land degradation. Considering India alone, the total area suffering from waterlogging is estimated to be about 3.3 million ha (Bhattacharya 1992), the major causes of waterlogging include super- ous irrigation supplies, seepage losses from canal, impeded sub-surface drainage, and lack of proper land development. In addition, many irrigated areas are s- jected to yield decline because of waterlogging due to inadequate drainage systems. Worldwide, it has been estimated that at least one-tenth of the irrigated cropland suffers from waterlogging.