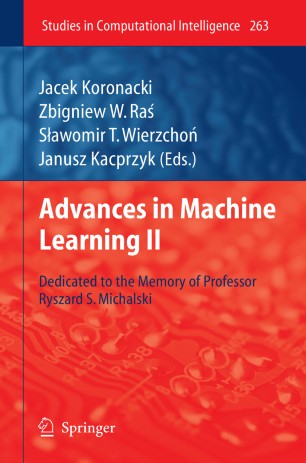 Dedicated to the Memory of Professor Ryszard S.Michalski

This is the second volume of a large two-volume editorial project we wish to dedicate to the memory of the late Professor Ryszard S. Michalski who passed away in 2007. He was one of the fathers of machine learning, an exciting and relevant, both from the practical and theoretical points of view, area in modern computer science and information technology. His research career started in the mid-1960s in Poland, in the Institute of Automation, Polish Academy of Sciences in Warsaw, Poland. He left for the USA in 1970, and since then had worked there at various universities, notably, at the University of Illinois at Urbana – Champaign and finally, until his untimely death, at George Mason University. We, the editors, had been lucky to be able to meet and collaborate with Ryszard for years, indeed some of us knew him when he was still in Poland. After he started working in the USA, he was a frequent visitor to Poland, taking part at many conferences until his death. We had also witnessed with a great personal pleasure honors and awards he had received over the years, notably when some years ago he was elected Foreign Member of the Polish Academy of Sciences among some top scientists and scholars from all over the world, including Nobel prize winners.

Professor Michalski’s research results influenced very strongly the development of machine learning, data mining, and related areas. Also, he inspired many established and younger scholars and scientists all over the world.

We feel very happy that so many top scientists from all over the world agreed to pay the last tribute to Professor Michalski by writing papers in their areas of research. These papers will constitute the most appropriate tribute to Professor Michalski, a devoted scholar and researcher. Moreover, we believe that they will inspire many newcomers and younger researchers in the area of broadly perceived machine learning, data analysis and data mining.

The papers included in the two volumes, Machine Learning I and Machine Learning II, cover diverse topics, and various aspects of the fields involved. For convenience of the potential readers, we will now briefly summarize the contents of the particular chapters.