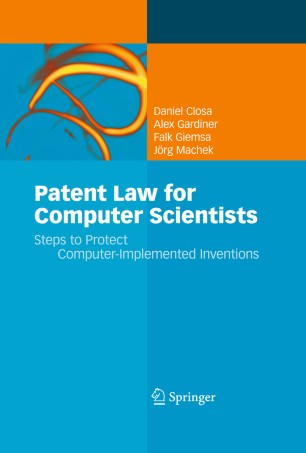 Patent laws are different in many countries, and inventors are sometimes at a loss to understand which basic requirements should be satisfied if an invention is to be granted a patent.  This is particularly true for inventions implemented on a computer.  While roughly a third of all applications (and granted patents) relate, in one way or another, to a computer, applications where the innovation mainly resides in software or in a business method are treated differently by the major patent offices in the US (USPTO), Japan (JPO) and Europe (EPO).

The authors start with a thorough introduction to patent laws and practices, and to related intellectual property rights, also explaining the procedures at the USPTO, JPO and EPO, and, in particular, the peculiarities in the treatment of applications centring on software or computers. Based on this theoretical description they then present, in a very structured way, a comprehensive set of case studies from differing areas including business methods, databases, graphical user interfaces and digital rights management. Each set starts with a short description and claim for the "invention",  explains a patent examiner’s likely arguments, then eventually refines step by step to avoid basic reservations against the content. All of these case studies are based on real-world examples, and will thus give an inexperienced developer a strong sense of the level of technical detail and description that should be provided.

Together, Closa, Gardiner, Giemsa and Machek have more than 70 years experience in the patent business.  With their academic backgrounds in physics, electronics engineering and computer science, they know both the legal and the technological subtleties of computer-based inventions. With this book, they provide a guide to a patent examiner’s way of thinking in a clear and systematic manner, helping to prepare the first steps towards a successful patent application.

Daniel Closa studied in France and worked for Thomson until 1987, when he joined the EPO as an examiner in Berlin. He later transferred to Munich, gaining experience in various technical fields in the electronics area. He specialised in opposition procedures and passed the European Qualifying Examination for patent attorneys in 1998.

Alex Gardiner studied engineering at Aberdeen University in the UK. He joined the EPO in Munich in 1990. In 1997 he moved to the EPO in The Hague and there faced the rapid increase in business method applications. He developed new working practices and procedures at the EPO in related matters and trained examiners at all EPO sites accordingly. He returned to Munich in 2007.

Falk Giemsa studied computer science at LMU in Munich, Germany. He joined the EPO as an examiner in 2002 and works in the fields of business methods and educational and demonstration appliances.

Jörg Machek is a physicist, he received a Diploma from Vienna University of Technology, Austria, and a PhD from Brunel University, UK. After six years in manufacturing and semiconductor devices research, he joined the EPO in 1986. He is a director in charge of searching and examining computer-implemented inventions and methods for doing business.