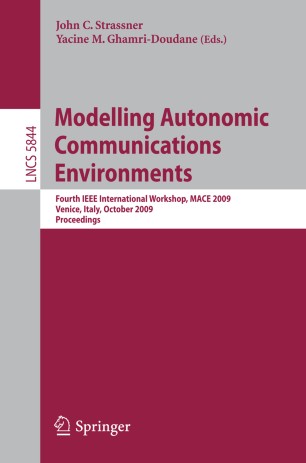 Research and development of autonomics have come a long way, and we are - lighted to present the proceedings of the 4th IEEE International Workshop on Modeling Autonomic Communications Environments (MACE 2009). As in the last three years, this workshop was held as part of Manweek, the International Week on Management of Networks and Services, which took place in the cult- ally rich city of Venice in Italy. Manweek is now an umbrella of ?ve workshops and conferences focusing on di?erent aspects of network and service mana- ment, including MACE, distributed operations and management (DSOM), - basedmanagement(IPOM),towardsmultimediaandmobilenetworks(MMNS), and virtualization and middleware for next generation networks (NGNM). F- ther information of Manweek and the individual workshops and conferences can be found athttp://www.manweek.org. MACE started as an experiment, in 2006, and created a small community that now ?nds itself attracted back each year by a feeling of excitement and anticipation to share new advances and development. Certainly, MACE is not as shiny or practiced as other well-known conferences and workshops, but we consider this a feature of the workshop itself. New ideas, a little rough around theedges(andsometimesmorethanalittle),oftenquiteun?nished,popoutand provoke extensive discussion. Science needs this kind of exploratory adventure, and we have been strongly motivated to continue preserving this atmosphere of exploration and discussion in this year’s technical program.