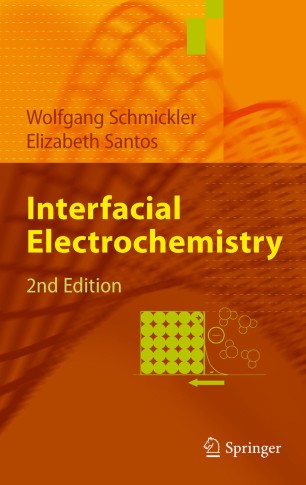 Electrochemistry is an old branch of physical chemistry. Due to the development of surface sensitive techniques, and a technological interest in fuel cells and batteries, it has recently undergone a rapid development. This textbook treats the field from a modern, atomistic point of view while integrating the older, macroscopic concepts. The increasing role of theory is reflected in the presentation of the basic ideas in a way that should appeal to experimentalists and theorists alike. Special care is taken to make the subject comprehensible to scientists from neighboring disciplines, especially from surface science. The book is suitable for an advanced course at the master or Ph.D. level, but should also be useful for practicing electrochemists, as well as to any scientist who wants to understand modern electrochemistry.

Elizabeth Santos studied physical chemistry at the University of Córdoba, Argentina, where she received her PhD in Physical Chemistry in 1982. After completing her degree she received a postdoctoral Fellowship from the Deutsche Akademische Austauschdienst (DAAD) to carry out research work at the University of Bonn, in Professor Wolf Vielstich’s working group. There she developed new techniques to study the kinetics of fast electron transfer reactions in electrochemistry, and collaborated in the first stages of the development of a new experimental method of line mass spectrometry applied to electrocatalysis. She returned to Argentina in 1987 and became Assistant Professor at the University of Córdoba. Between 1996 and 1998, she was in the Argentina Research Program Integrated Expertises of the International Centre of Migration, Federal Ministerial of Cooperation and Development of Germany. She has visited various research institutions in Europe and the USA. She was a Research Associate in analytical chemistry at the University of Utah and member of the scientific staff at the Centre for Solar Energy and Hydrogen Research in Ulm, Germany. She received the Award of the Secretary of Science and Technology of Córdoba for Academic Excellence in 1991. In 1993, she joined Professor Schmickler’s working group in Ulm, where she currently directs the experimental work. She is also an Independent Researcher for the National Council of Scientific Research and Technology (Argentina). Wolfgang Schmickler studied physics and chemistry at the Universities of Bonn and Heidelberg and at the Imperial College in London. In 1973 he received his PhD in Physical Chemistry from the University of Bonn. After completing his degree he received first a Liebig Fellowship from the German Association of the Chemical Industry and then a Heisenberg Fellowship from the German Reseach Foundation (DFG). He used the freedom that these fellowships offered him for extended visits at the Frumkin Institute in Moscow, the Laboratoire d’Electrochimie Interfaciale du CNRS in Meudon, France, and the IBM Research Laboratory in San Jose, California, USA. For his work on the theory of the electric double layer he received the Bodenstein Award of the Deutsche Bunsengesellschaft in 1985. He became an assistant professor at the University of Bonn in the same year, but moved to the United States in 1990, where he held the position of an Associate Professor at Utah State University in Logan. In 1992, he returned to Germany and took a faculty position at the University of Ulm, where he has been since. His research interests lie in theoretical electrochemistry; in recent years the focus of his work has been on electrocatalysis and electrode surface processes. He is a Fellow of the International Society of Electrochemistry, and Corresponding Scientist of the Consejo Nacional de Investigaciones Científicas y Técnicas of Argentina.