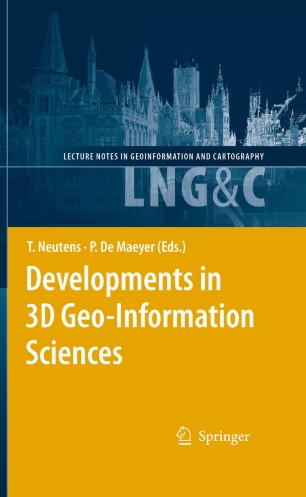 Realistically representing our three-dimensional world has been the subject of many (philosophical) discussions since ancient times. While the recognition of the globular shape of the Earth goes back to Pythagoras’ statements of the sixth century B. C. , the two-dimensional, circular depiction of the Earth’s surface has remained prevailing and also dominated the art of painting until the late Middle Ages. Given the immature technological means, objects on the Earth’s surface were often represented in academic and technical disciplines by two-dimensional cross-sections oriented along combinations of three mutually perpendicular directions. As soon as computer science evolved, scientists have steadily been improving the three-dimensional representation of the Earth and developed techniques to analyze the many natural processes and phenomena taking part on its surface. Both computer aided design (CAD) and geographical information systems (GIS) have been developed in parallel during the last three decades. While the former concentrates more on the detailed design of geometric models of object shapes, the latter emphasizes the topological relationships between geographical objects and analysis of spatial patterns. Nonetheless, this distinction has become increasingly blurred and both approaches have been integrated into commercial software packages. In recent years, an active line of inquiry has emerged along the junctures of CAD and GIS, viz. 3D geoinformation science. Studies along this line have recently made significant inroads in terms of 3D modeling and data acquisition.