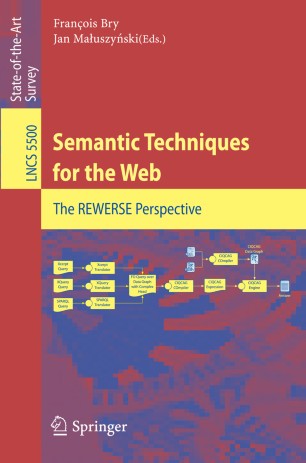 Semantic Techniques for the Web

The objective of this state-of-the-art survey is to give a coherent overview of the main topics and results achieved by the Network of Excellence REWERSE on "Reasoning on the Web", funded by the European Commission and Switzerland within the "6th Framework Programme" (FP6), from 2004 to 2008.

The material has been organized into eight chapters, each of which addresses one of the main topics of REWERSE: hybrid reasoning with rules and ontologies, lessons in versatility or how query languages adapt to the Web, evolution and reactivity in the Semantic Web, rule-based policy representations and reasoning, component models for Semantic Web languages, controlled English for reasoning on the Semantic Web, semantic search with GoPubMed, and information integration in bioinformatics with ontologies and standards.

Each chapter gives an in-depth coverage of the subject and provides an extensive bibliography with pointers to further literature.