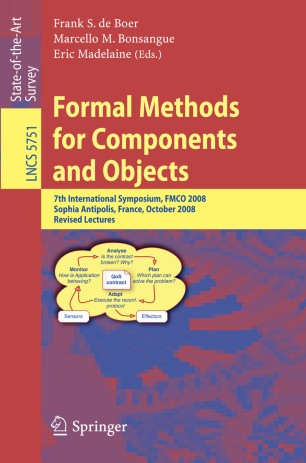 All modern industries rely on large and complex software systems. In order to construct such large systems in a systematic manner, the focus of the development methodologies has switched in the last two decades from functional to structural issues. Formal methods have been applied successfully to the verification of medium-sized programs in protocol and hardware design. However, their application to the development of large systems requires a greater emphasis on specification, modeling, and validation techniques supporting the concepts of reusability and modifiability, and their implementation in new extensions of existing programming languages like Java.

This state-of-the-art survey presents the outcome of the 7th Symposium on Formal Methods for Components and Objects, held in Sophia Antipolis, France, in October 2008. The volume contains 14 revised contributions submitted after the symposium by speakers from each of the following European IST projects: the IST-FP7 project COMPAS on compliance-driven models, languages, and architectures for services; the IST-FP6 project CREDO on modelling and analysis of evolutionary structures for distributed services; the IST-FP7 DEPLOY on industrial deployment of advanced system engineering methods for high productivity and dependability; the IST-FP6 project GridComp on grid programming with components; and the IST-FP6 project MOBIUS aiming at developing the technology for establishing trust and security for the next generation of global computers, using the proof carrying code paradigm.