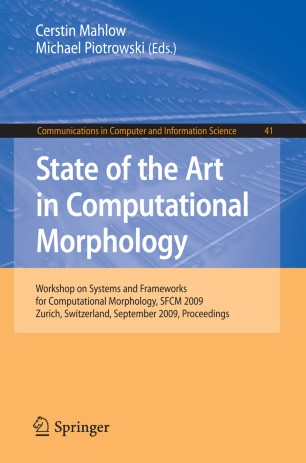 SFCM: International Workshop on Systems and Frameworks for Computational Morphology

State of the Art in Computational Morphology

Part of the Communications in Computer and Information Science book series (CCIS, volume 41)

From the point of view of computational linguistics, morphological resources are the basis for all higher-level applications. This is especially true for languages with a rich morphology, such as German or Finnish. A morphology component should thus be capable of analyzing single word forms as well as whole corpora. For many practical applications, not only morphological analysis, but also generation is required, i.e., the production of surfaces corresponding to speci?c categories. Apart from uses in computational linguistics, there are also numerous practical - plications that either require morphological analysis and generation or that can greatly bene?t from it, for example, in text processing, user interfaces, or information - trieval. These applications have speci?c requirements for morphological components, including requirements from software engineering, such as programming interfaces or robustness. In 1994, the First Morpholympics took place at the University of Erlangen- Nuremberg, a competition between several systems for the analysis and generation of German word forms. Eight systems participated in the First Morpholympics; the conference proceedings [1] thus give a very good overview of the state of the art in computational morphologyfor German as of 1994.