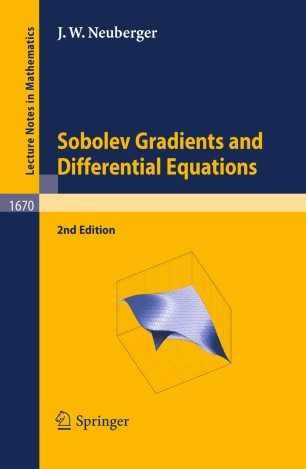 A Sobolev gradient of a real-valued functional on a Hilbert space is a gradient of that functional taken relative to an underlying Sobolev norm. This book shows how descent methods using such gradients allow a unified treatment of a wide variety of problems in differential equations. For discrete versions of partial differential equations, corresponding Sobolev gradients are seen to be vastly more efficient than ordinary gradients. In fact, descent methods with these gradients generally scale linearly with the number of grid points, in sharp contrast with the use of ordinary gradients. Aside from the first edition of this work, this is the only known account of Sobolev gradients in book form.

Most of the applications in this book have emerged since the first edition was published some twelve years ago. What remains of the first edition has been extensively revised. There are a number of plots of results from calculations and a sample MatLab code is included for a simple problem. Those working through a fair portion of the material have in the past been able to use the theory on their own applications and also gain an appreciation of the possibility of a rather comprehensive point of view on the subject of partial differential equations.