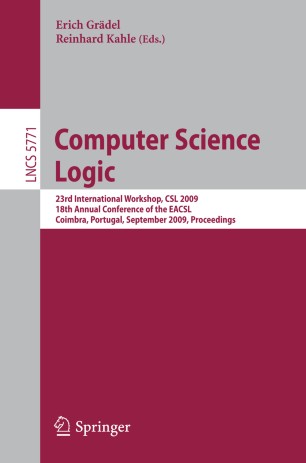 The annual conference of the European Association for Computer Science Logic (EACSL), CSL 2009, was held in Coimbra (Portugal), September 7–11, 2009. The conference series started as a programme of International Workshops on Computer Science Logic, and then at its sixth meeting became the Annual C- ference of the EACSL. This conference was the 23rd meeting and 18th EACSL conference; it was organized at the Department of Mathematics, Faculty of S- ence and Technology, University of Coimbra. In response to the call for papers, a total of 122 abstracts were submitted to CSL 2009of which 89 werefollowedby a full paper. The ProgrammeCommittee selected 34 papers for presentation at the conference and publication in these proceedings. The Ackermann Award is the EACSL Outstanding Dissertation Award for Logic in Computer Science. The awardrecipient for 2009 was Jakob Nordstr¨ om. Citation of the award, abstract of the thesis, and a biographical sketch of the recipient may be found at the end of the proceedings. The award was sponsored for the years 2007–2009 by Logitech S.A.