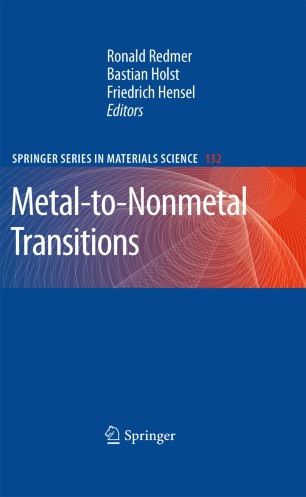 This book is devoted to nonmetal-to-metal transitions. The original ideas of Mott for such a transition in solids have been adapted to describe a broad variety of phenomena in condensed matter physics (solids, liquids, and fluids), in plasma and cluster physics, as well as in nuclear physics (nuclear matter and quark-gluon systems). The book gives a comprehensive overview of theoretical methods and experimental results of the current research on the Mott effect for this wide spectrum of topics. The fundamental problem is the transition from localized to delocalized states which describes the nonmetal-to-metal transition in these diverse systems. Based on the ideas of Mott, Hubbard, Anderson as well as Landau and Zeldovich, internationally respected scientists present the scientific challenges and highlight the enormous progress which has been achieved over the last years. The level of description is aimed to specialists in these fields as well as to young scientists who will get an overview for their own work. A common feature of all contribution is the extensive discussion of „bound states", i.e. their formation and dissolution due to medium effects. This applies to atoms and molecules in plasmas, fluids, and small clusters, excitons in semiconductors, or nucleons, deuterons, and alpha-particles in nuclear matter. In this way, the transition from delocalized to localized states and vice versa can be described on a common level.