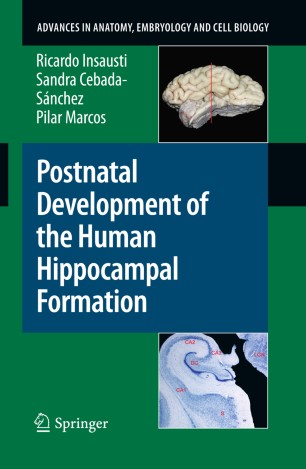 The postnatal development of the human hippocampal formation (HF) is subject of increasing interest due to its implication in important pathologies that hamper the normal development of children. In this work, the authors present a glimpse of the main events that constitute important milestones in the development and shaping of some of the most important psychological capabilities such as autobiographical memory. Although they examined some cases in the last trimester of gestation, their description starts at birth, around 40 gestational weeks. Serial sections with thionin for Nissl analysis revealed that all fields of the HF were present and identifiable at birth. However, the relative growth of the cortical mantle was much higher relative to the HF. The main structural changes took place during the first postnatal year, in particular in the dentate gyrus and in the entorhinal cortex. At subsequent ages, a growth in size was noted in all components of the HF. This growth was more evident at the body and tail of the hippocampus, as evidenced by measurements of the neuroanatomical series. In addition, the authors examined in some cases the MRI appearance of the HF at different postnatal ages obtained by post-mortem imaging. MRI neuroanatomical series provided anatomically identified landmarks useful for the MRI identification of different components of the HF during postnatal development.

“Number 206 in the Series Advances in Anatomy Embryology and Cell Biology, the authors describe the early development of the hippocampus, a CNS region important for the normal development of children. Of interest to anatomists, embryologists and developmental neurologists.” (Pediatric Endocrinology Reviews, Vol. 7 (4), June, 2010)