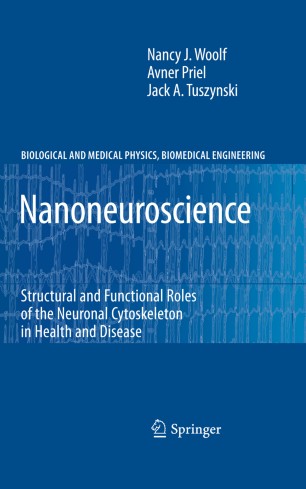 Nanoneuroscience is the study of computationally relevant biomolecules found inside neurons. Because of recent technological advances at the nanometer scale, scientists have at their disposal increasingly better ways to study the brain and the biophysics of its molecules. This book describes how biomolecules contribute to the operations of synapses and perform other computationally relevant functions inside dendrites. These biomolecular operations considerably expand the brain-computer analogy - endowing each neuron with the processing power of a silicon-based multiprocessor. Amazingly, the brain contains hundreds of billions of neurons.

Nancy J. Woolf teaches behavioral neuroscience and neuropharmacology at the University of California, Los Angeles. She received her Ph.D. in Neuroscience at UCLA School of Medicine in 1983. Her areas of research include the organization of acetylcholine systems, neural plasticity and memory, neural degeneration and Alzheimer’s disease, and consciousness and cognition. She is specifically interested in microtubules in cognition and disease.

Avner Priel is a physicist trained at Bar-Ilan University and Weizmann Institute of Science in Israel. His theoretical and experimental work focuses on the electromagnetic properties of cytoskeletal macromolecules and their interactions with membrane structures, in particular in dendrites. Through the use of patch clamp technique, he has shown that microtubules support ionic waves propagation and amplify electric signals, thereby behaving as bio-transistors.

Jack A. Tuszynski is Allard Research Chair in Oncology at the Cross Cancer Institute and Professor in the Department of Physics at the University of Alberta, Edmonton, Canada. As an international expert in biomolecular theory, Tuszynski has served as project leader of the MITACS Center of Excellence: "Mathematical Modelling in Pharmaceutical Development" and built an international and interdisciplinary team of scientists working on computer simulations of cells, organs and physiological processes.