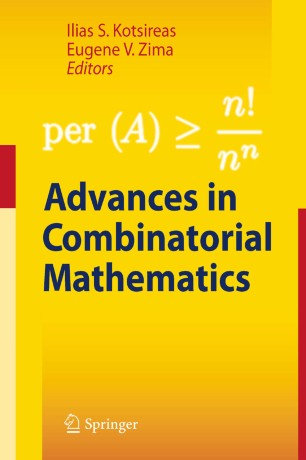 Proceedings of the Waterloo Workshop in Computer Algebra 2008

The Second Waterloo Workshop on Computer Algebra (WWCA 2008) was held May 5-7, 2008 at Wilfrid Laurier University, Waterloo, Canada. This conference was dedicated to the 70th birthday of Georgy Egorychev (Krasnoyarsk, Russia), who is well known and highly regarded as the author of the influential, milestone book "Integral Representation and the Computation of Combinatorial Sums," which described a regular approach to combinatorial summation, today also known as the method of coefficients. Another great success of this Russian mathematician came in 1980, when he solved the van der Waerden conjecture on the determination of the minimum of the permanent of a doubly stochastic matrix and was awarded the D. R. Fulkerson Prize.

This book presents a collection of selected formally refereed papers submitted after the workshop. The topics discussed in this book are closely related to Georgy Egorychev’s influential works.