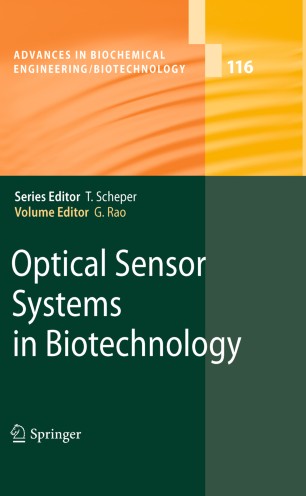 Of all things natural, light is the most sublime. From the very existential belief of the origins of the universe to its role in the evolution of life on earth, light has been inextricably woven into every aspect of our lives. I am grateful to Springer-Verlag and Thomas Scheper for this invitation to organize this volume that continues to expand the use of light to create next generation sensing applications. Indeed, the very act of expanding the frontiers of learning and knowledge are referred to in many languages and cultures as enlightenment. Early optical instruments relied largely on simple combinations of mirrors, prisms and lenses. With these simple devices, substantial progress was made in our understanding of the properties of light and of its interactions with matter. Things got more complicated with the evolution of optical instruments in labo- tory use. Early systems used bulky and expensive hardware to generate light, split it into the desired wavelengths and finally collect it for analysis. The discovery of the laser pushed the technology further, but did not do much to make its adoption more widespread as the lasers themselves were large and required substantial el- trical power to operate. The true revolution is just beginning. Advances in mic- electronics have resulted in the possibility of truly low-cost (using the consumer electronics industry as a parallel) devices that exploit optical measurement technology.