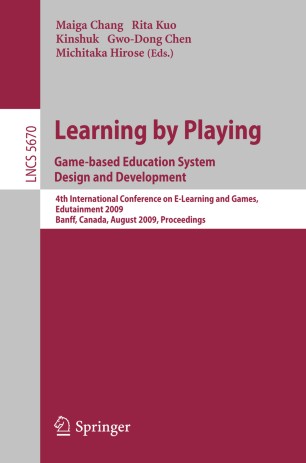 Edutainment: International Conference on Technologies for E-Learning and Digital Entertainment

With the widespread interest in digital entertainment and the advances in the technologies of computer graphics, multimedia and virtual reality technologies, the new area of “Edutainment” has been accepted as a union of education and computer entertainment. Edutainment is recognized as an effective way of learning through a medium, such as a computer, software, games or AR/VR applications, that both educates and entertains. The Edutainment conference series was established and followed as a special event for the new interests in e-learning and digital entertainment. The main purpose of Edutainment conferences is the discussion, presentation, and information exchange of scientific and technological developments in the new community. The Edutainment conference series is a very interesting opportunity for researchers, engineers, and graduate students who wish to communicate at these international annual events. The conference series includes plenary invited talks, workshops, tutorials, paper presen- tion tracks, and panel discussions. The Edutainment conference series was initiated in Hangzhou, China in 2006. Following the success of the first (Edutainment 2006 in Hangzhou, China), the second (Edutainment 2007 in Hong Kong, China), and the third events (Edutainment 2008 in Nanjing, China), Edutainment 2009 was held August 9–11, 2009 in Banff, Canada. This year, we received 116 submissions from 25 different countries and regions - cluding Austria, Canada, China, Denmark, Finland, France, Germany, Greece, Hong Kong, Italy, Japan, Korea, Malaysia, Mexico, The Netherlands, Norway, Portugal, Singapore, Spain, Sweden, Switzerland, Taiwan, Trinidad and Tobago, UK, and USA.