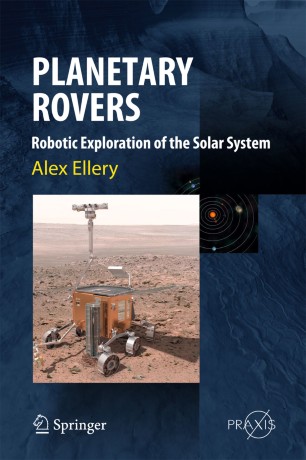 The increasing adoption of terrain mobility – planetary rovers – for the investigation of planetary surfaces emphasises their central importance in space exploration. This imposes a completely new set of technologies and methodologies to the design of such spacecraft – and planetary rovers are indeed, first  and foremost, spacecraft. This introduces vehicle engineering, mechatronics, robotics, artificial  intelligence and associated technologies to the spacecraft engineer’s repertoire of skills. Planetary Rovers is the only book that comprehensively covers these aspects of planetary rover engineering and more. The book:

• stresses the importance of robotic vision in rovers for both navigation and science;

• introduces sample acquisition and autonomous science – with an emphasis on astrobiology – as the raison d’être of rover missions;

• presents a special case study on the exploration of Europa;

• discusses future rover concepts, including a brief exploration of the role of biomimetics.

Professor Alex Ellery is a Canada Research Chair in Space Robotics & Space Technology in the Mechanical & Aerospace Engineering Department at Carleton University, Ottawa, Canada. He holds a BSc (Hons) in Physics, MSc in Astronomy and PhD in Astronautics & Space Engineering. He is also an alumnus of the International Space University. He is a Chartered Engineer and holds Fellowships at the Institution of Engineering & Technology, Institution of Mechanical Engineers, and the Royal Aeronautical Society. He was formerly at the Surrey Space Centre at the University of Surrey where he was awarded the George Stephenson medal by the Institution of Mechanical Engineers (2005). He was formerly Chair of the Astrobiology Society of Britain (2005/2006).

“It aims to be a complete overview of the design, implementation and control of planetary rovers, ranging widely from details of past rovers, through overviews of algorithm research into the process of bidding and managing projects for the European Space Agency (ESA). … it targets a wide audience from final year undergraduates to industry engineers involved with rover development – anyone involved in rover design. … I would recommend this book to anyone working or interested in the field … .” (Dr. Iain Wallace, The Aeronautical Journal, January, 2017)
Buy options