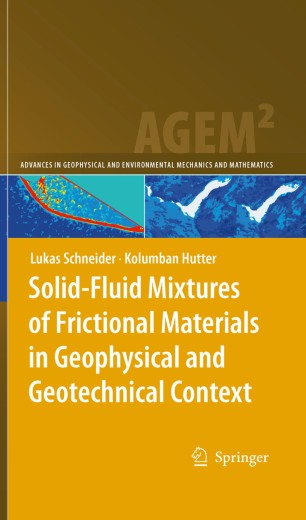 Solid-Fluid Mixtures of Frictional Materials in Geophysical and Geotechnical Context

Based on a Concise Thermodynamic Analysis

Mixture concepts are nowadays used in a great number of subjects of the - ological, chemical, engineering, natural and physical sciences (to name these alphabetically) and the theory of mixtures has attained in all these dis- plines a high level of expertise and specialisation. The digression in their development has on occasion led to di?erences in the denotation of special formulations as ‘multi-phase systems’ or ‘non-classical mixtures’, ‘structured mixtures’, etc. , and their representatives or defenders often emphasise the di?erences of these rather than their common properties. Thismonographisanattempttoviewtheoreticalformulationsofprocesses which take place as interactions among various substances that are spatially intermixedandcanbeviewedtocontinuously?llthespacewhichtheyoccupy as mixtures. Moreover, we shall assume that the processes can be regarded to becharacterisedbyvariableswhichobeyacertaindegreeofcontinuityintheir evolution, so that the relevant processes can be described mathematically by balance laws, in global or local form, eventually leading to di?erential and/or integralequations,towhichtheusualtechniquesoftheoreticalandnumerical analysis can be applied. Mixtures are generally called non-classical, if, apart from the physical laws (e. g. balances of mass, momenta, energy and entropy), also further laws are postulated,whicharelessfundamental,butmaydescribesomefeaturesofthe micro-structure on the macroscopic level. In a mixture of ?uids and solids – thesearesometimescalledparticleladensystems–thefractionofthevolume that is occupied by each constituent is a signi?cant characterisation of the micro-structure that exerts some in?uence on the macro-level at which the equations governing the processes are formulated. For solid-?uid mixtures at high solids fraction where particle contact is essential, friction between the particles gives rise to internal stresses, which turn out to be best described by an internal symmetric tensor valued variable.