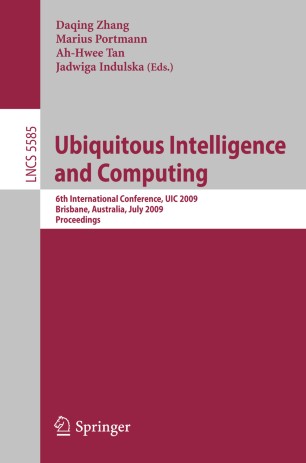 This volume contains the proceedings of UIC 2009, the 6th International C- ference on Ubiquitous Intelligence and Computing: Building Smart Worlds in Real and Cyber Spaces. The UIC 2009 conference was technically co-sponsored by the IEEE and the IEEE Computer Society Technical Committee on Scalable Computing. The conference was also sponsored by the Australian Centre of - cellence in Information and Communication Technologies (NICTA). UIC 2009 was accompanied by six workshops on a variety of research challenges within the area of ubiquitous intelligence and computing. The conference was held in Brisbane, Australia, July 7–9, 2009. The event was the sixth meeting of this conference series. USW 2005 (First International Workshop on Ubiquitous Smart World), held in March 2005 in Taiwan, was the ?rst event in the series. This event was followed by UISW 2005 (Second International Symposium on Ubiquitous Intelligence and Smart Worlds) held in December 2005 in Japan. Since 2006, the conference has been held annually under the name UIC (International Conference on Ubiquitous Intelligence and Computing). UIC 2006 was held in September 2006 in Wuhan andThreeGorges,China,followedbyUIC2007heldinJuly2007inHongKong, and UIC 2008 held in June 2008 in Oslo, Norway. Ubiquitous sensors,computers, networksand informationare paving the way towardasmartworldinwhichcomputationalintelligenceisdistributedthrou- out the physical environment to provide reliable and relevant services to people.