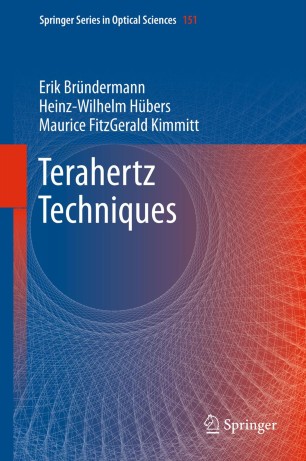 Research and development in the terahertz portion of the electromagnetic spectrum has expanded very rapidly during the past fifteen years due to major advances in sources, detectors and instrumentation. Many scientists and engineers are entering the field and this volume offers a comprehensive and integrated treatment of all aspects of terahertz technology. The three authors, who have been active researchers in this region over a number of years, have designed Terahertz Techniques to be both a general introduction to the subject and a definitive reference resource for all those involved in this exciting research area.

Erik Bründermann and Heinz-Wilhelm Hübers met in 1986 at the Universität Bonn while studying physics, mathematics, and astronomy; and physics and medicine, respectively. In 1991, they both received diploma degrees in different areas of THz technology while working at the Max-Planck-Institut für Radioastronomie (MPIfR) within the group of Hans-Peter Röser. Since Maurice Kimmitt became associated with their research efforts at the MPIfR in 1990, they have shared a longstanding appreciation of each other and become the firmest of friends both inside and outside the laboratory.

Erik Bründermann received a Dr. rer. nat. degree in physics and mineralogy in 1994 while working at the MPIfR, and then he joined the Deutsches Zentrum für Luft- und Raumfahrt (DLR, German Aerospace Center) in Berlin. In 1997, he was awarded a Feodor Lynen-fellowship of the Alexander von Humboldt-foundation, which took him to the Lawrence Berkeley National Laboratory and the Center for Particle Astrophysics. There, together with his host, Eugene E. Haller, he filed a patent on Ge and Si THz lasers. After 2 years in the USA as a visiting researcher, he became a member of the Ruhr-Universität Bochum (RUB), currently as permanent staff scientist serving also as technical advisor to the Applied Competence Cluster (ACC) THz at RUB. His research interests are in physics, mathematics, life science, and technology, spanning the entire spectral range from the THz region to the visible. Within the faculty of chemistry and biochemistry, he developed THz techniques for applications, especially for liquid samples in living conditions. Due to his interest in hyperspectral, multimodal, and multidimensional imaging, he initiated the development of chemical nanoscopes at RUB, which are used for nanoscale objects, molecules, and living cells. For his contribution to the development of a combined microscopy method, he received an Innovation Prize of RUB in 2007. Teaching is an integral part of his daily life, having taught countless students at all levels of education. He designed hands-on experiments ranging from those suitable for second year students up to large-scale research experiments such as a chemical nanoscope at the synchrotron ANKA. He has received several Japanese Center of Excellence awards at the National Institute of Communication and Technology (NICT, Tokyo) and was elected as Honorable Guest Professor at Shizuoka University in 2009. He serves on a yearly basis as a visiting guest professor at the Department of Nanovision Technology and the Graduate School of Science and Technology, hosted by Norihisa Hiromoto at the Hamamatsu Campus. He is a lifetime member of the Optical Society of America. In 2010, he initiated the regional group “Ruhrgebiet” of the German Humboldt-Club supported by the Alexander von Humboldt-foundation and, as a speaker for this group, he fostered multilateral and multicultural exchanges between scientists across faculties and disciplines.

Heinz-Wilhelm Hübers received a Dr. rer. nat. degree in physics and astronomy in 1994 from the Universität Bonn, and a habilitation degree from the Universität Stuttgart in 2009. From 1991 to 1994, he was with the MPIfR working on a THz heterodyne spectrometer for NASA’s Kuiper Airborne Observatory. During this time, he spent eight months at the National Institute of Standards and Technology in Boulder, USA, where he worked in the group of K. Evenson on far-infrared laser magnetic resonance spectroscopy of free radicals. In 1994, he joined DLR in Berlin, where he became head of the department in 2001. Since 2009, he has been professor of experimental physics at the Technische Universität Berlin and head of the department of “Experimental Planetary Physics” at DLR. A major focus of his research interest is on THz physics and spectroscopy. He is particularly interested in THz lasers and detectors, such as silicon lasers, quantum cascade lasers, and superconducting hot electron bolometers. In cooperation with a group at the electron storage ring BESSY II in Berlin, he began research on coherent THz synchrotron radiation in 1998. This led to the first demonstration of stable coherent THz synchrotron radiation in 2002. Since his time as a doctorate student, he has been involved in the development of THz heterodyne spectrometers for applications in astronomy and planetary research. In 2004, he began the development of THz systems for security applications and was a coordinator of one of the first European security research projects “TeraSec”. He is a co-investigator of the THz heterodyne receiver GREAT, which is operated on SOFIA, the Stratospheric Observatory for Infrared Astronomy, and is a spokesperson of the “Helmholtz Research School on Security Technologies.” Another research focus is on experimental planetary physics. This deals with the investigation of mineral and ice samples, which are similar to materials found, or assumed to exist, on planetary bodies. These materials are being investigated in the laboratory under simulated planetary conditions with LIBS, Raman, and FTIR spectroscopy. With this work, he is contributing, amongst others, to ESA’s ExoMars mission. Professor Hübers has received the Innovation Award on Synchrotron Radiation (2003) and the Lilienthal Award (2007).

Maurice Kimmitt graduated from Trinity College, Dublin, in 1954 and joined the Royal Radar Establishment in Malvern, UK, where his initial research was on infrared detectors. In 1957, he became part of a small group set up to study the far-infrared (FIR) emission from ZETA, Britain’s first attempt at controlled thermonuclear fusion. This research was successful and gave accurate results for both the average plasma temperature and density in ZETA, and later several other plasmas. During this research, he was the inventor of a tunable FIR detector and was part of a team that reported the first FIR laser in 1964. In 1965, he joined the Physics Department of the then new University of Essex in a research position, where he worked on carbon dioxide lasers and a number of detectors for use throughout the infrared region. He was co-inventor of the photon drag detector, which is still widely used with lasers. In 1970, his book “Far-Infrared Techniques,” which was a brief but comprehensive description of the state of the art, was published. In 1973, Essex awarded him a PhD for a thesis on “Infrared Experimental Studies.” He continued his research on a variety of FIR lasers and detectors until taking early retirement from the University in 1982, but retaining a part-time post until 1990. Since 1983, he has participated in research over a number of years at Heriot-Watt University in Scotland, and later at ENEA, Frascati, in Italy, on free-electron lasers, and on p-Ge lasers and FIR detectors in Germany at the MPIfR in Bonn and the DLR in Berlin. From 1989, he was a frequent visitor to Dartmouth College, USA, where he became an Adjunct Professor of Physics and Astronomy in 1994. This research, which also involved a group at Oxford University, was primarily on Smith-Purcell sources for the THz region, and it continued until 2005. The Oxford and Dartmouth groups realized that observation of Smith–Purcell (S-P) emission at THz frequencies was a valuable method of studying the quality of particle beams. Professor Kimmitt has collaborated on S-P experiments at Oxford, the Technical University in Munich, Germany, at FOM in The Netherlands, at ENEA, and at SLAC in the USA, using electron beams with energies between 3MV and 28GV. He has travelled extensively, lecturing in countries as far apart as China and Argentina. In 2004, he was awarded the annual Kenneth J Button Prize for “Pioneering contributions to the field of far-infrared Physics” and in 2010 was the Honorary Chair of the “International Conference on Infrared, Millimeter and Terahertz Waves” held in Rome. He is a Fellow of the UK’s Institute of Physics and has been a Member of the Optical Society of America for nearly 50 years. In the January, 2012 edition of the journal “IEEE Transactions on Terahertz Science and Technology”, he was profiled as a ‘Terahertz Pioneer’.