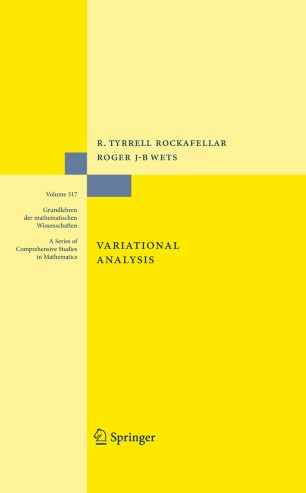 From its origins in the minimization of integral functionals, the notion of 'variations' has evolved greatly in connection with applications in optimization, equilibrium, and control. It refers not only to constrained movement away from a point, but also to modes of perturbation and approximation that are best describable by 'set convergence', variational convergence of functions and the like. This book develops a unified framework and, in finite dimension, provides a detailed exposition of variational geometry and subdifferential calculus in their current forms beyond classical and convex analysis. Also covered are set-convergence, set-valued mappings, epi-convergence, duality, maximal monotone mappings, second-order subderivatives, measurable selections and normal integrands.

The changes in this 3rd  printing mainly concern various typographical corrections, and reference omissions that came to light in the previous printings. Many of these reached the authors' notice through their own re-reading, that of their students and a number of colleagues mentioned in the Preface. The authors also included a few telling examples as well as improved a few statements, with slightly weaker assumptions or have strengthened the conclusions in a couple of instances.