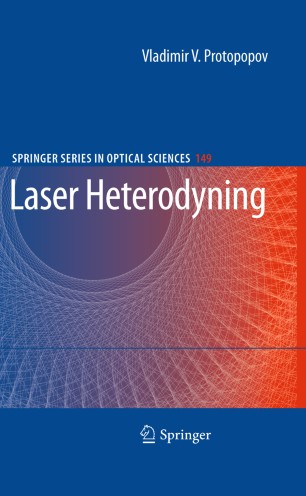 Laser heterodyning is now a widespread optical technique, based on interference of two waves with slightly different frequencies within the sensitive area of a photo-detector. Its unique feature – preserving phase information about optical wave in the electrical signal of the photo-detector – finds numerous applications in various domains of applied optics and optoelectronics: in spectroscopy, polarimetry, radiometry, laser radars and Lidars, microscopy and other areas. The reader may be surprised by a variety of disciplines that this book covers and satisfied by detailed explanation of the phenomena. Very well illustrated, this book will be helpful for researches, postgraduates and students, working in applied optics.

Vladimir Protopopov is Leading Research Scientist at the Moscow State University and Principal Engineer at Samsung Electronics Co., Mechatronics Center. He received his Ph.D. and Dr.Sc. degrees in the fields of radio-physics and applied optics. He is a co-author of other books: «Methods of Processing of Optical Fields», «Laser Radars», and «Infrared Laser Radars» published in Russia, United States and Yugoslavia. Apart of the visible optics domain, his research interests include X-ray optics where he is widely known as a pioneer of the depth-graded multilayer optical elements. He is the author of some sixty scientific articles and dozens of patents.