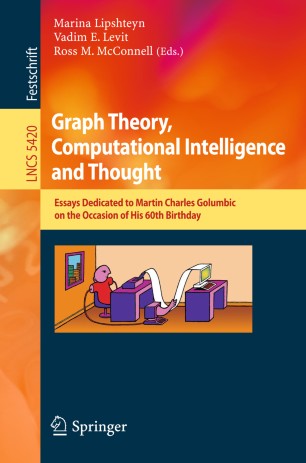 Martin Charles Golumbic has been making seminal contributions to algorithmic graph theory and artificial intelligence throughout his career. He is universally admired as a long-standing pillar of the discipline of computer science. He has contributed to the development of fundamental research in artificial intelligence in the area of complexity and spatial-temporal reasoning as well as in the area of compiler optimization. Golumbic's work in graph theory led to the study of new perfect graph families such as tolerance graphs, which generalize the classical graph notions of interval graph and comparability graph. He is credited with introducing the systematic study of algorithmic aspects in intersection graph theory, and initiated research on new structured families of graphs including the edge intersection graphs of paths in trees (EPT) and trivially perfect graphs.

Golumbic is currently the founder and director of the Caesarea Edmond Benjamin de Rothschild Institute for Interdisciplinary Applications of Computer Science at the University of Haifa. He also served as chairman of the Israeli Association of Artificial Intelligence (1998-2004), and founded and chaired numerous international symposia in discrete mathematics and in the foundations of artificial intelligence.

This Festschrift volume, published in honor of Martin Charles Golumbic on the occasion of his 60th birthday, contains 20 papers, written by graduate students, research collaborators, and computer science colleagues, who gathered at a conference on subjects related to Martin Golumbic's manifold contributions in the field of algorithmic graph theory and artificial intelligence, held in Jerusalem, Tiberias and Haifa, Israel in September 2008.

From the reviews: “In 2008, a weeklong conference was organized to celebrate Golumbic’s 60th birthday. This volume is a collection of the conference proceedings … . It contains 20 papers, in addition to Golumbic’s conference lecture. … papers are accessible even to readers who only have a rudimentary understanding of Golumbic’s work. … Three groups of people would benefit from reading this volume: researchers in Golumbic’s circle, researchers … who are looking for a new frontier to, and graduate students in pursuit of a research topic.” (San Skulrattanakulchai, ACM Computing Reviews, March, 2009)
Buy options