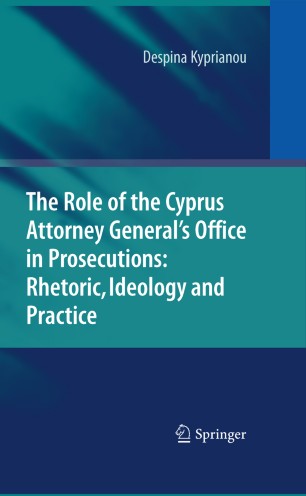 The Role of the Cyprus Attorney General's Office in Prosecutions: Rhetoric, Ideology and Practice

This book is a fascinating and entirely original work about the role of the Cyprus Attorney General’s Office in prosecutions. It is based on data gathered using an impressive blend of methods, including observation, a documentary survey and semi-structured interviews within the Office.

The book focuses mainly on the workload of the Law Office and its relationship with the Police, the role it acquires during investigations and its role in the formulation and application of prosecution policies. These themes are approached from three different angles: the legal framework and the rhetoric developed over time concerning these areas, combined with the manner in which successive Attorney Generals have approached their role; the ideology that characterises the Law Officers’ position towards these particular functions, and the actual day-to-day activity (practices) observed within the Law Office.

Although the central purpose of this work is to provide a profound understanding of the Cyprus system, wider conclusions can be drawn which exceed the boundaries of the particular jurisdiction and shed light on the most debatable aspects of the prosecution process in all jurisdictions.