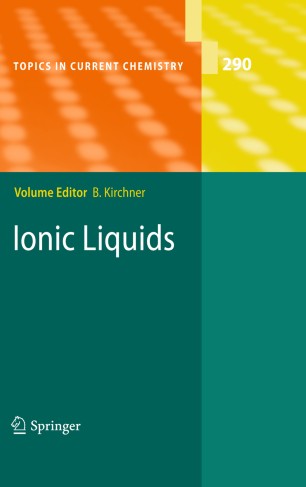 “Ionic liquids will never find application in industry”, “I don’t understand this fad for ionic liquids” and “there is no widespread interest in these systems” are just three of quotes from the reports of referees for research proposals that I have received over the years. I wonder what these people think today. There are currently at least nine large-scale industrial uses of ionic liquids, including, we now rec- nise, the production of ?-Caprolactam (a monomer for the production of nylon-6) [1]. There has been a steady increase in the interest in ionic liquids for well over a decade and last year the number of papers and patents including ionic liquids was counted in the thousands. This remarkable achievement has been built on the hard work and enthusiasm, first of a small band of devotees, but now of huge numbers of scientists all over the world who do not see themselves as specialists in ionic liquids. The ionic liquids field continues to develop at an incredible rate. No sooner do I think that I am on top of the literature than it turns out that a whole new area of work has emerged without me noticing. Things that were once supposedly impos- 1 sible in ionic liquids, such as measuring the H NMR of solutes, are now widely applicable (see Chapter 8). Hence, collected volumes such as this are very w- come.

From the reviews: Ionic liquids from the Topics in current chemistry series is a valuable resource for the newcomer, as the book primarily focuses on the fundamentals. Appropriately, the book begins by discussing approaches for the synthesis, purification and characterisation of ionic liquids. The majority of the chapters survey topics that will allow the reader to obtain a greater understanding of ionic liquids and their properties. The book covers essential areas such as thermophysical properties, spectroscopy, the strength of ionic liquid-solute interactions (polarity) and the influence of ionic liquids on chemical reactions. There are also reviews on theoretical investigations that attempt to understand and predict the physicochemical properties of ionic liquids. Additionally, there are chapters that discuss areas of growing importance, such as the use ionic liquids for heavy elements, processing biomass and the synthesis and application of functionalised ionic liquids (so called 'task specific ionic liquids'). The book is an excellent text for those who are new to the field and it would also serve as a useful reference for more experienced practitioners.
Buy options