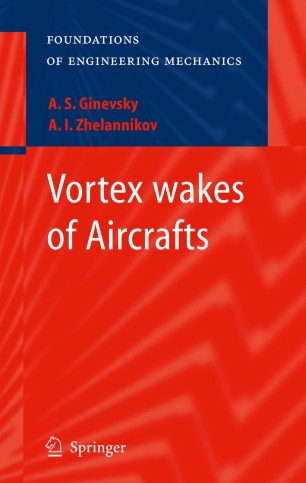 The book presents methods of mathematical modeling of vortex wakes of aircraft in flights at high altitudes and close to the ground at take-off-landing regimes. The modeling is based on an extensive application of the method of discrete vortices in aircraft flights at high altitudes and on a conjugation of this method with the integral method of predicting the turbulent boundary layer which is produced at the secondary wall transversal flow induced by the aircraft vertex system at take-of-landing regimes. In this latter case an interaction between the vortex wake of aircraft and the secondary vortices generated at boundary layer separations is taken into account.

The authors consider separately methods of modeling the near and far vortex wakes of aircrafts with turbojets and air propellers and they present the results of predicting vortex wakes of a series of domestic and foreign aircrafts. The effect of number of factors is taken into account in these cases: turbulence and atmosphere stratification, presence of side wind at take- off-landing regimes.

The computer time consumption while modeling the vortex wakes according to the proposed method is 3 - 4 orders less than in the case of using the well-known numerical methods.

The non-linear non-stationary mathematical model of light aircraft movement when they enter the vortex wake of a heavy aircraft with a description of possible catastrophic consequences for the light aircraft is considered separately. A comparison between the prediction data and the experimental results is given.

The book is intended for researchers and engineers, as well as for lecturers, post-graduate and undergraduate students.