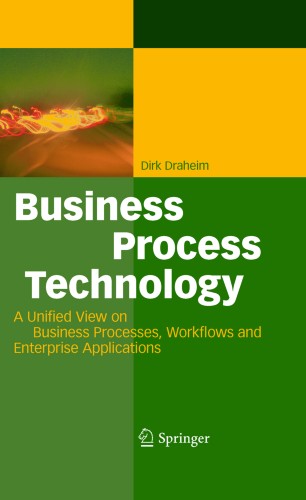 A Unified View on Business Processes, Workflows and Enterprise Applications

Currently, we see a lot of tools and techniques for specifying and implementing business processes. The problem is that there are still gaps and tensions between the different disciplines needed to improve business process execution and improvement in enterprises. Business process modeling, workflow execution and application programming are examples of disciplines that are hosted by different communities and emerged separately from each other. In particular, at the system analysis level concepts are not yet fully elaborated.

Therefore, practitioners are faced again and again with similar questions in concrete business process projects: which decomposition mechanism to use? Who to find the correct granularity for business process activities? Which implementing technology is the optimal one in a given situation?

This book approaches a systematization of the field. The method of the book is explicitly not a comparative analysis of existing tools and techniques – albeit the review of existing tools is a most important source for the considerations in the book. Rather, the book tries to provide a landscape of rationales and concepts in business processes with a discussion of alternatives.

Dirk Draheim holds a Diploma in Computer Science from the Technische Universität Berlin since 1994 and a PhD in Computer Science from the Freie Universität Berlin since 2002. Since 1999 he gives lectures on Software Engineering at the Freie Universität Berlin. From 2004 to 2006 he was a research associate in the project "Typed User Interfaces", which is granted by the German Research Foundation DFG. In summer 2006 he was lecturer in human-computer interaction at the University of Auckland. Since summer 2006 until autumn 2008 he was senior researcher at the SCCH (Software Competence Center Hagenberg) in the position of the Area Manager Database Technology. Furthermore, he was guest professor in software engineering at the University of Mannheim in winter 2006 and guest lecturer in applied computer science at the Johannes Kepler University Linz in summer 2007 and summer 2008. Since autumn 2008 he is head of the IT department of the University of Innsbruck. Dirk Draheim is interested in system modeling, semantic web, web applications, and databases.

“Draheim’s book serves to help unify these fields by clarifying the differences and the similarities in the concepts, relating the technologies to computer science principles, and envisioning a unified future for the use of business process technology. … The book has been carefully written and effectively organized. It is technically precise, without getting too deep in the weeds to distract readers from the concepts or examples being presented. Many helpful diagrams are included, and 363 references are given.” (M. G. Murphy, ACM Computing Reviews, August, 2011)