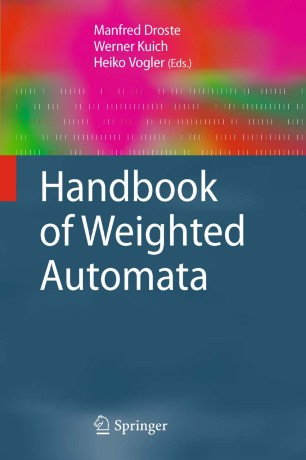 The purpose of this Handbook is to highlight both theory and applications of weighted automata. Weighted finite automata are classical nondeterministic finite automata in which the transitions carry weights. These weights may model, e. g. , the cost involved when executing a transition, the amount of resources or time needed for this,or the probability or reliability of its successful execution. The behavior of weighted finite automata can then be considered as the function (suitably defined) associating with each word the weight of its execution. Clearly, weights can also be added to classical automata with infinite state sets like pushdown automata; this extension constitutes the general concept of weighted automata. To illustrate the diversity of weighted automata, let us consider the following scenarios. Assume that a quantitative system is modeled by a classical automaton in which the transitions carry as weights the amount of resources needed for their execution. Then the amount of resources needed for a path in this weighted automaton is obtained simply as the sum of the weights of its transitions. Given a word, we might be interested in the minimal amount of resources needed for its execution, i. e. , for the successful paths realizing the given word. In this example, we could also replace the “resources” by “profit” and then be interested in the maximal profit realized, correspondingly, by a given word.