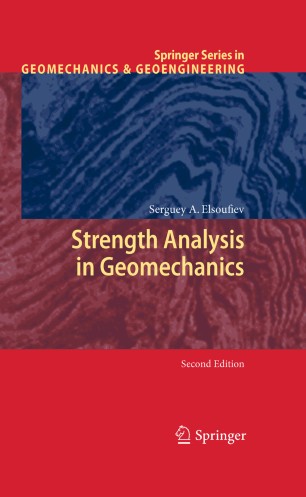 The book presents a new approach for the solution of geomechanical problems - it explicitly takes into account deformation and fracture in time, which are neglected in classical methods although these properties create important effects. The method reveals the influence of the form of a structure on its ultimate state. It uses the rheological law which accounts for large strains at a non-linear unsteady creep, an influence of a stress state type, an initial anisotropy and damage. The whole approach takes into account five types of non-linearity (physical as well as geometrical ones) and contains several new ideas. For example, it considers the fracture as a process, the difference between the body and an element of the material which only deforms and fails because it is in the structure, the simplicity of some non-linear computations against the consequent linear ones, the dependence of the maximum small strain in dangerous poins of the body only on the material.

"This book presents a new analysis of the solutions for geomechanical problems, tacking into account nonlinear effects, fracture and damage of structures. … The work is organized in 6 chapters, followed by 14 appendices and a bibliography. … The book is recommended to civil engineers and geologists." (Olivian Simionescu, Zentralblatt MATH, Vol. 1116 (18), 2007)