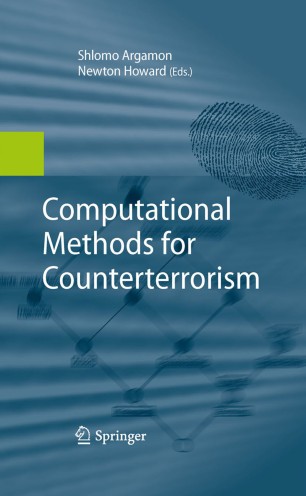 Modern terrorist networks pose an unprecedented threat to international security. Their fluid and non-hierarchical structures, their religious and ideological motivations, and their predominantly non-territorial objectives all radically complicate the question of how to neutralize them. As governments and militaries work to devise new policies and doctrines to combat terror, new technologies are desperately needed to make these efforts effective.

This book collects a wide range of the most current computational research addressing critical issues for counterterrorism in a dynamic and complex threat environment:

The contributions are organized thematically into four sections. The first section concerns efforts to provide effective access to small amounts of relevant information buried in enormous amounts of diverse unstructured data. The second section discusses methods for the key problem of extracting meaningful information from digitized documents in various languages. The third section presents research on analyzing graphs and networks, offering new ways of discovering hidden structures in data and profiles of adversaries’ goals and intentions. Finally, the fourth section of the book describes software systems that enable analysts to model, simulate, and predict the effects of real-world conflicts.

The models and methods discussed in this book are invaluable reading for governmental decision-makers designing new policies to counter terrorist threats, for members of the military, intelligence, and law enforcement communities devising counterterrorism strategies based on new technologies, and for academic and industrial researchers devising more effective methods for knowledge discovery in complicated and diverse datasets.

Shlomo Argamon is Associate Professor of Computer Science at the Illinois Institute of Technology, Chicago, IL, USA, since 2002. Prior to that, he had held academic positions at Bar-Ilan University, where he held a Fulbright Postdoctoral Fellowship (1994-96), and at the Jerusalem College of Technology. Dr. Argamon received his B.S. (1988) in Applied Mathematics from Carnegie-Mellon University, and his M.Phil. (1991) and Ph.D. (1994) in Computer Science from Yale University, where he was a Hertz Foundation Fellow. His current research interests lie mainly in the use of machine learning methods to aid in functional analysis of natural language, with particular focus on questions of style. During his career, Dr. Argamon has worked on a variety of problems in experimental machine learning, including robotic map-learning, theory revision, and natural language processing, and has published numerous research papers in these areas.