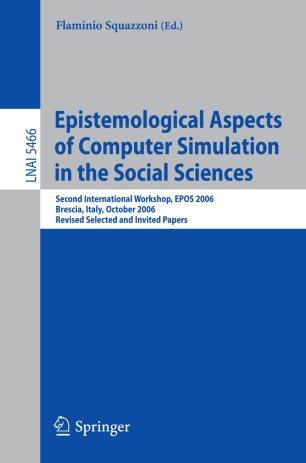 EPOS: International Workshop on Epistemological Aspects of Computer Simulation in the Social Sciences

Epistemological Aspects of Computer Simulation in the Social Sciences

This volume collects the revised versions of the invited and selected papers that were presented at the Second EPOS––Epistemological Perspectives on Simulation––Workshop, held in Brescia, Italy, in October 2006. EPOS is a bi-annual cross-disciplinary workshop on simulation originally established by Ulrich Frank and Klaus G. Troitzsch, with a first e- tion held in Koblenz in July 2004. EPOS aims to provide a forum for scholars from various disciplines, such as the social sciences, computer sciences, engineering and natural sciences, who are interested in discussing epistemological aspects of computer simulation across disciplinary boundaries. The common belief behind the workshop is the recognition that the time has come to seriously reflect on epistemological and methodological preconditions, processes and consequences of simulation as a research tool. During the fist edition in Koblenz 2004, a number of interesting topics were ca- fully addressed: the link between theory and simulation models, the empirical vali- tion of agent-based models in the natural and the social sciences, the relation between models and truth, as well as the role of stylized facts in evidence-based models. A good cross-disciplinary atmosphere permeated the workshop, making possible the exchange of knowledge and ideas beyond any disciplinary boundary. The first EPOS proceedings were edited by Ulrich Frank and Klaus G. Troitzsch and published in the Journal of Artificial Societies and Social Simulation, Vol. 8, No. 4, 2005.